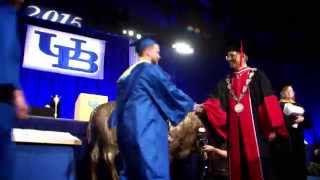 "You will use your UB education to change the direction of your profession. You will push the boundaries of accepted knowledge. And you will change our world for the better."
Satish K. Tripathi, UB President

Good morning!  Welcome to all our families and honored guests. Most of all, congratulations to the Class of 2015!

Today we celebrate your achievements, and your future. As graduates, you take with you a considerable body of knowledge accumulated through countless hours of study, debate, and research.

But what you know is only part of the story. It is what you do with this knowledge that will shape your unique contributions to humanity.

What I am really talking about is the creative impulse—the force that brings knowledge to life, transforms ideas into action, imagines new worlds beyond our experience…and then makes them a reality.

Information alone is silent and passive—until we ignite it with a creative spark. The creative impulse pulls and assembles meaning from assorted facts and data. It is what makes discovery, problem-solving, and innovation possible.

So today, we celebrate the creativity that only you can bring to your disciplinary knowledge—and its transformative potential.

Speaking of transformative, let me tell you a brief story.

It begins in 1956, in a barn in Clarence, NY owned by Wilson Greatbatch. While earning a master’s degree in engineering at UB, Greatbatch was working on a device intended to record heart sounds.

By accident, he grabbed the wrong kind of resistor from a box full of parts. As soon as he installed it, he realized his mistake. But in the next moment, he recognized the monumental significance of this error. With this resistor, he wasn’t just recording sound—he was actually creating a pulse; a pacemaker.

I should point out that early pacemakers existed at this point, but only as external devices that had to be plugged into an electrical outlet. With his accidental discovery, Greatbatch thought he could build a pacemaker small enough to be implanted in the human body.

So, in collaboration with his Buffalo colleagues, this accidental discovery became one of the most significant medical innovations of the 20th century. His invention has impacted thousands of cardiac patients, and gave rise to the modern medical device industry. And all this started with a simple error.

Where some may just have corrected the mistake and moved on, Greatbatch shifted his thinking to solve an entirely different problem.

So whatever your field—whether you are defining a new musical genre or exploring new frontiers in space—there will always be new problems to solve, unexpected challenges to confront head-on.

UB has a proud tradition of intellectual risk-taking.

As UB students, you haven’t just learned from the relative safety of textbooks and lectures. You have contributed actively to the creation of new knowledge.

You have worked first-hand with faculty at the cutting edge of their fields. You have been out in front as new discoveries are made, and new hypotheses are tested.

There is nothing riskier—or more rewarding—than being one of the first to venture a new idea, a new approach to an ancient problem.

Just like Wilson Greatbatch, generations of UB students before you have made their own bold leaps—and the results have been transformative.

What if Terry Gross, as a young UB undergraduate, had never entered the WBFO booth in the early days of college radio? NPR—and talk radio as we know it—might have taken an entirely different course.

What if Ellen Shulman Baker hadn’t taken her first UB geology class? Would she have ventured into outer space? What would the world have lost without her contributions as NASA’s chief medical officer?

What if Thomas Curley had never made the leap from studying film to helping create film? Would we have had the chance to hear his Oscar-winning sound mixing on Whiplash this year?

There are literally thousands of examples of UB alumni changing the world as we know it through their creativity and intellectual daring.

Now you will continue that story.

You will use your UB education to change the direction of your profession. You will push the boundaries of accepted knowledge. And you will change our world for the better.

With your UB education, we are all eager to see what new solutions, new possibilities, and new worlds you will create.

Congratulations, and all best wishes for much continued success!

"Information alone is silent and passive, until we ignite it with a creative spark."