Former UB linebacker Khalik Mack answers questions from the press after being selected by the Oakland Raiders in the first round of the 2014 NFL Draft. Photo: Jon Fuller

‘Team players’ perform better and can improve your workplace

Tim Maynes, PhD, assistant professor of organization and human resources in the UB School of Management
“Hiring managers need to look beyond just the previous job performance of candidates. Finding a candidate who will take the time to go the extra mile will benefit the team they’re working on and the organization as a whole. ”
Tim Maynes, Assistant Professor of Organization and Human Resources
University at Buffalo School of Management 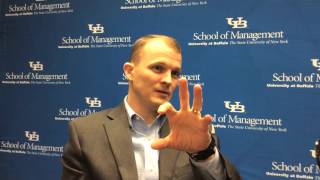 Professor Maynes discusses the findings of his study.

BUFFALO, N.Y. — When NFL teams draft players, the player’s willingness to go above and beyond the call of duty is just as important as the number of catches or tackles he makes, according to new research from the University at Buffalo School of Management.

Forthcoming in the Journal of Applied Psychology, the study explored the traits that make college football players successful in the NFL beyond on-field statistics and included “contextual performance” – behaviors such as working harder than necessary, making personal sacrifices that benefit the team and helping co-workers with work-related problems.

“These ‘character guys’ are better investments for NFL teams,” says study co-author Tim Maynes, PhD, assistant professor of organization and human resources in the UB School of Management. “Players who hit the weight room after practice, spend extra time analyzing game film, or help a rookie learn the ropes while in college will be drafted earlier, awarded higher starting salaries and be more successful in the NFL.”

The researchers analyzed 440 college football players—218 wide receivers and 222 linebackers—who were drafted into the NFL between 2006 and 2012. They searched more than 36,000 media sources for articles spanning each player’s entire four-year college career to find instances where they acted as team players.

“Hiring managers need to look beyond just the previous job performance of candidates,” says Maynes. “Finding a candidate who will take the time to go the extra mile will benefit the team they’re working on and the organization as a whole.”

The authors also found that while NFL teams consider these off-field characteristics when selecting players to be drafted, outsiders, such as sports writers tabulating draft prospect rankings, do not. In comparing the two approaches, NFL team selections more accurately predict player performance than draft ranking lists.

The researchers say further research should analyze industries other than the NFL, to investigate best practices for hiring in non-team settings, and to take other factors into consideration such as national culture, and differences in hiring managers and team climate.

Maynes collaborated on the project with Steve Whiting, PhD, assistant professor of management at the University of Central Florida College of Business.