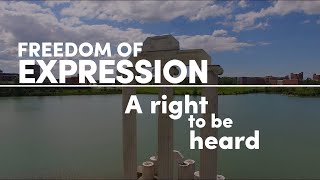 UB's Commitment to Freedom of Speech

“Congress shall make no law respecting an establishment of religion, or prohibiting the free exercise thereof; or abridging the freedom of speech, or of the press; or the right of the people peaceably to assemble, and to petition the Government for a redress of grievances.” - U.S. Const. Amend. I

As a public university, UB upholds the principles of the First Amendment and respects this constitutionally protected right. We acknowledge differing viewpoints and do not tolerate repression of expression, even if particular views may be diametrically opposed to those of members of our university or the wider community.

Below are a series of questions and answers related to free speech on campus, the First Amendment, the rights of employees, students, and invited speakers to campus, and University at Buffalo's commitment to safety.

Freedom of speech is the right of a person to articulate opinions and ideas without interference or retaliation from the government. The term “speech” constitutes expression that includes far more than just words, but also what a person wears, reads, performs, protests and more.

The Constitution guarantees freedom of speech by default, placing the burden on the state to demonstrate whether there are any circumstances that justify its limitation.

The relevant exceptions to the First Amendment that have been established are:

Absolutely. UB supports the notion of a “marketplace of ideas” in which speech that a person disagrees with should be met with more speech that engages and debates it. The First Amendment and the university are founded on the premise that we are all better off if ideas can be expressed and responded to.

The University at Buffalo strives to create an environment in which diverse opinions can be expressed and heard.  As a public university, it is a fundamental value of UB that all members of the campus community and their invited guests have a right to peacefully express their views and opinions, regardless of whether others may disagree with those expressions.

The university does not take a position on the views expressed by those who visit its campus. However, the university requires all groups using campus space to abide by university guidelines and state laws concerning the exhibition and management of public events.

As a public university, it is a fundamental value of UB that all members of the campus community and their invited guests have a right to peacefully express their views and opinions, regardless of whether others may disagree with those expressions. This includes the right of protesters to oppose the views or opinions of others, but not in such a way as to limit or prevent the speaker's freedom of expression or interfere with university operations.

Exploring diverse points of view and engaging in open discussion are core principles upheld at UB. Student government-sponsored clubs have the ability to invite speakers of their choosing to the university and must follow university guidelines and state laws concerning the exhibition and management of public events on campus.

UB is committed to being a safe and welcoming place for all people.  University Police typically have a presence at on-campus public events to help ensure the safety of speakers and attendees.

The University at Buffalo will:

In regard to on-campus student actions and assemblies that tend to endanger life, public or private property or to violate local, state or federal laws, each student will take the consequence of his or her own actions as an individual before the law, as well as being referred to the appropriate university disciplinary body.

The financing of speakers varies by event. For example. some speaker events, such as the Distinguished Speaker Series, are financed entirely through ticket sales, sponsorships and/or endowments; some are funded through student governments that have an affiliation with the University at Buffalo.

As a public institution of higher education, the University at Buffalo recognizes its responsibility to supplement its undergraduate, graduate and professional programs with extracurricular activities.  To permit the appropriate scheduling of facilities, and the observance of requirements for safety and financial responsibility, all requests for use of any type of university space or grounds — other than that required for scheduled academic, intramural and intercollegiate activities — must have a university sponsorship.

The request for space is accepted or rejected on the basis of space availability, necessary services, review of the event for propriety and safety, and timely and properly executed documents of authorization. Academic use of space shall have preemptive priority over non-academic use.

The university requires all groups using campus space to abide by university guidelines and state laws concerning the exhibition and management of public events.

Public access and fees vary by event   Some speaker events are free and open to the public, but tickets are needed in order to attend because of space limitations; others may require a fee to attend.

Speech occurring in an instructional or research context is covered by academic freedom principles. Academic freedom is protected in both the Policies of the Board of Trustees and the State-UUP Agreement.

Exploring diverse points of view in the course of scholarly debate, discussion and research is vital to UB’s academic mission. The freedom of faculty members and students to explore topics related to their areas of scholarship and research is fundamental to our mission and is encouraged by our faculty. Sometimes these topics are contentious, but we believe that academic freedom is essential for fostering a better understanding of the world we share.

The Constitution prohibits the University at Buffalo, as a public institution, from banning or punishing speech based on its content or viewpoint. Because campus policy permits registered student organizations to invite speakers to campus and provides access to campus venues for that purpose, the university cannot take away that right or withdraw those resources based on the views of the invited speaker. Doing so would violate the First Amendment rights of the student group. Only under extraordinary circumstances, described in the “Which types of speech are not protected by the First Amendment?” section, can an event featuring a speaker invited this way be cancelled.

Secondly, once a speaker has been invited by a student group, the campus is obligated and committed to acting reasonably to ensure that the speaker is able to safely and effectively address his or her audience, free from violence or disruption.

The term “hate speech” does not have a legal definition in the United States, but it often refers to speech that insults or demeans a person or group of people on the basis of attributes such as race, religion, ethnic origin, sexual orientation, disability or gender. While the university condemns speech of this kind, there is no “hate speech” exception to the First Amendment and it is only illegal if it falls into one of the categories described above. In fact, on many occasions, the Supreme Court has explicitly held that prohibitions or punishments for hateful speech violate the First Amendment.

UB’s Discrimination and Harassment Policy defines “harassment” as “conduct that is unwelcome, severe, pervasive, or persistent enough to interfere with an individual's employment, education, or other access to university programs and activities, and that is targeted toward an individual or group based on a protected factor.”  Protected factors include race, color, national origin, sex, religion, age, disability, gender, pregnancy, gender identity, gender expression, sexual orientation, predisposing genetic characteristics, marital status, familial status, veteran status, military status, domestic violence victim status, and ex-offender status.  Generally, harassment requires that speech be of the following nature: (1) specifically targeted at a student or group of students, (2) repeated, and (3) intimidating or threatening, or otherwise rising to a level that interferes with an individual’s work or education.

UB can address conduct that is in violation of the Discrimination and Harassment Policy, which is consistent with federal and New York State laws prohibiting discrimination and harassment. In balancing the requirements of anti-discrimination laws with First Amendment protections, UB considers guidance such as that provided by the U.S. Department of Education’s Office for Civil Rights (OCR), which enforces federal anti-discrimination laws and regulations. OCR’s 2003 First Amendment: Dear Colleague Letter states in part, “…in addressing harassment allegations, OCR has recognized that the offensiveness of a particular expression, standing alone, is not a legally sufficient basis to establish a hostile environment under the statutes enforced by OCR. In order to establish a hostile environment, harassment must be sufficiently serious (i.e., severe, persistent or pervasive) as to limit or deny a student's ability to participate in or benefit from an educational program. OCR has consistently maintained that schools in regulating the conduct of students and faculty to prevent or redress discrimination must formulate, interpret, and apply their rules in a manner that respects the legal rights of students and faculty, including those court precedents interpreting the concept of free speech.” The guidance further states, “Under OCR's standard, the conduct must also be considered sufficiently serious to deny or limit a student's ability to participate in or benefit from the educational program. Thus, OCR's standards require that the conduct be evaluated from the perspective of a reasonable person in the alleged victim’s position, considering all the circumstances, including the alleged victim’s age.” Offensive statements in a public forum that is not mandatory for students to attend would not rise to the level of harassment under UB Policy, state law or federal law.  It should be noted that offensive statements delivered in a class where students are expected or required to attend, and that have no legitimate academic purpose, could be in violation of the Discrimination and Harassment Policy.

No. As a public university, it is a fundamental value of UB that all members of the campus community and their invited guests have a right to peacefully express their views and opinions, regardless of whether others may disagree with those expressions. This includes the right of protesters to oppose the views or opinions of others, but not in such a way as to limit or prevent the speaker's freedom of expression or interfere with university operations.

The University supports individual's rights to assemble. Public assemblies (protests, picketing, etc.) are allowed. Those members of the University community who feel compelled to express their dissent through picketing and other forms of demonstration must adhere to the following parameters:

UB is committed to fostering a diverse, inclusive and safe environment for our students, faculty, staff, alumni and other campus visitors. It is who we are at UB; it is how we identify as a campus community. It is what motivates us to cultivate a living and learning community where all feel safe, respected and valued.