Legacies of Suffrage: Women's Activism Then and Now

To mark the centennial of the 19th Amendment’s ratification and to celebrate Women’s History Month, the Gender Institute hosted a one-day symposium on the historical lessons of the women’s suffrage movement and its legacy today, including recognition of trailblazing women of color who are often forgotten in suffrage movement history.

Legacies of Suffrage featured national historians, politicians, and activists in exciting keynotes and panels that explored the history of suffrage and the possibilities for women’s civic engagement in the future.

Legacies of Suffrage: Women's Activism Then and Now was made possible with generous support from The Baldy Center for Law & Social Policy and the Erie County Commission on the Status of Women. 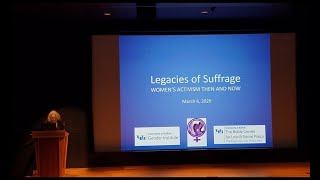 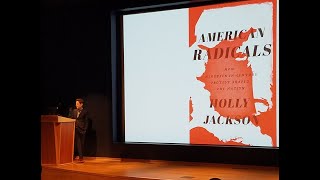 Holly Jackson
"'Voting for the Right is Doing Nothing for It': 19th-Century American Radicalism and the Turn to Suffrage." 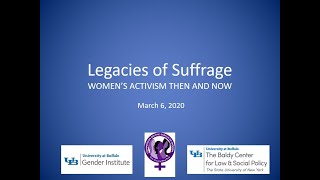 Holly Jackson is an Associate Professor of English at University of Massachusetts Boston and Associate Editor of the New England Quarterly. Jackson is the author of American Radicals: How 19th-Century Protest Shaped the Nation  and recently contributed an op-ed to The Washington Post entitled “Beyond Suffrage: It’s Time to Fight for the Original and Unfulfilled Goals of the Women’s Movement.”

Lisa Tetrault is an Associate Professor of History at Carnegie Mellon University. She specializes in the history of U.S. women and gender with a focus on social movements (particularly feminism), American democracy, and the politics of memory.

Her first book, The Myth of Seneca Falls: Memory and the Women's Suffrage Movement, 1848-1898 (University of North Carolina Press, 2014) won the Organization of American Historians' inaugural Mary Jurich Nickliss women's history book prize. The Myth uncovers the politics behind the manufacture of an origins myth for feminism.

Karen King is the Commissioner of Public Advocacy for Erie County and the Executive Director of the Erie County Commission the Status of Women. The Commission works to provide resources to the women and girls of Erie County, to ensure that they participate fully in matters that have an impact on their lives and toward the elimination of all gender based discrimination and the promotion of women’s economic, societal and political empowerment.   She serves on Governor Como’s New York State Council for Women and Girls, the Erie County Fair Housing Board, the Minority, Women Business Enterprise Utilization Advisory Board and the Executive Committee of the University at Buffalo Gender Institute.

Melina Carnicelli Is the founder and director of 1st Amendment, 1st Vote!  In 1995, Melina was elected to the Auburn, NY City Council; in 1999 she became the first woman elected to a four-year term as mayor of Auburn.   Prior to that, she spent much of her professional career as a public school teacher and administrator. In 1990, Melina co-founded a workplace consulting firm specializing in organizational development and valuing diversity. In December 2016, she collaborated with others to lead the development and implementation of Women March in Seneca Falls, and in 2018, she spearheaded 1st Amendment-1st Vote, Inc., a civic engagement program for high school girls designed to encourage them to become actively involved in the political process.

Jennifer Hibit is the Chief of Staff to County Executive Mark Poloncarz and acts as a liaison between departments and County Executive Poloncarz. She serves as the Secretary to the Erie County Democratic Committee and helps identify and support candidates for local office. In 2020, she is running as a delegate for Joe Biden to the Democratic National Convention. Hibit has worked on political campaigns around the US and has brought her political campaign experience back to her native Western New York.

Maria Whyte is the Deputy Erie County Executive, as the DCE, she advances the County’s most significant economic development projects and provides strategic operational support for the County’s many departments. She served as the Commissioner for the Erie County Department of Environment and Planning prior to her appointment as the DCE. Whyte represented the 6th District in the County Legislature and served as the Democratic Majority Leader, the first freshman Legislator to ever be elected Majority Leader.

"'Voting for the Right is Doing Nothing for It': 19th-Century American Radicalism and the Turn to Suffrage"

“When Women Won the Right to Vote:  A History Unfinished.”

Special Screening: Knock Down the House

Knock Down the House (2019)
Directed by Rachel Lears

Legacies of Suffrage kicked off with a special screening of the hit documentary, Knock Down the House (2019) by acclaimed documentarian Rachel Lears. The screening is hosted in conjunction with the Burchfield Penney Art Center's Beyond Boundaries series at Buffalo State College.

A discussion followed the screening with Juanita Perez Williams, the first Latina person to run for Mayor in Syracuse, New York.

Born and raised in San Diego, California, Juanita Perez Williams is a proud Mexican-American. Perez Williams entered the United States Navy in the Judge Advocate General’s Program after graduating from law school. Perez Williams completed her military service with the rank of Lieutenant Commander and was appointed by Governor Mario Cuomo to the NYS Education Department. In 2001, she accepted a legal position with Syracuse University later becoming the Associate Dean of Students.  During her time at Syracuse University, Perez Williams was selected by Senator Hillary Clinton to be a member of the Military Selection Review Board for Upstate NY. Perez Williams has been a leader in Central New York as the Regional Director of the Department of Labor and the Workers’ Compensation Board.

In 2017, Perez Williams ran for City of Syracuse Mayor and was the first Latino Mayoral candidate to win a primary. Although losing in the general election, the national congressional democratic party, impressed with Perez Williams' military and legal background, assisted her in a bid for the 24th congressional district seat. While not successful in the primary, Perez Williams continues to be a voice for Democratic values and the local community.

* Suiting Up: Feminism and Fashion