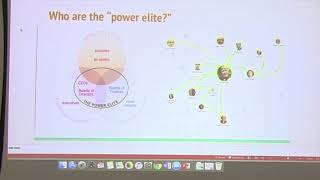 This workshop is a mix of theory and practice. We’ll walk through the basics of what power research is, how it is used in activist organizing, and its place in a social justice framework. Then we’ll get in to how to identify and start mapping the power elite using the LittleSis power research tools. These skills can be applied at any level, from federal level politics and big name multinational corporations to your local crony developers and patronage gigs.

LittleSis.org is a wiki-style research platform and database that tracks relationships between powerful people and organizations. The name LittleSis is the opposite of Big Brother so instead of looking down, we as a research community are watching back, keeping tabs on the powers that be. We believe that given the right tools anyone can do this kind of important research and hold power accountable. LittleSis was co-founded by two student activists who wanted to create an easy tool for people to more easily map out networks of influence. The database went live in 2009 and now contains over 300,000 entities and 1.3 million relationships connecting them. The database is overseen by our non-profit, the Public Accountability Initiative, a watchdog research group focused on corporate and government accountability. We specialize in something we call power research, that is identifying and mapping out the connections between corporations and wealthy elites that consolidate and maintain influence in our society and our economy.

Eating Disorders and Body Love, a workshop with Gloria Lucas

Gloria Lucas is a Xicana womxn and the person behind Nalgona Positivity Pride. Straight from the Inland Empire, the DIY punk community in Riverside taught her how to organize since age 18. She has helped put together Ladyfest IE, Ladyfest LA, IE Riot Grrrls, and Women of Color for Decolonization. In 2014, she founded Nalgona Positivity Pride from years of dealing with the violent lack of women of color representation in the eating disorder-awareness community. Like the chingona womxn of color that came before, she creates spaces for marginalized folks to support each other and heal from the trauma of colonialism, eurocentric beauty ideals, and disordered eating in communities of color. She has lectured across the nation in different universities and community organizations. Gloria’s work has been featured at the Huffington Post, MiTú, Bitch Magazine, and The Body is not an Apology. Her most recent project is SageSpoon, an online support group for indigenous people and people of color with eating problems. She lives in Los Angeles with her partner and their cats, Pepita and Mister Orange.