Bob Skerker’s passion for architecture informs his love of Buffalo, and UB’s role in building its economy and cultural reputation locally and around the world.

Robert “Bob” Skerker’s support of the UB School of Architecture and Planning aligns with several of his interests: modern architecture; strengthening Buffalo’s economy and cultural reputation; and UB’s role in building that recognition locally and around the world.

Skerker grew up in North Buffalo within walking distance of Delaware Park, major museums and other city treasures. Years later, as a successful business executive and civic leader, he met Brian Carter, former dean of the school, who introduced Skerker to contemporary architecture through the school’s lecture series, helping him to begin “viewing modern architecture as monumental works of art.”

Skerker isn’t an alumnus but has family ties to UB through his late father, Bernard Skerker, a passionate Bulls football booster. As Buffalo’s fortunes ebbed and flowed, Bob became involved in organizations, like UB, that he felt nurtured the city’s architectural heritage and burgeoning economy.

Skerker notably helped launch the Jacobs Institute on the Buffalo Niagara Medical Campus and serves on the architecture and planning school’s Dean’s Council. As a board member of Frank Lloyd Wright’s Darwin Martin House, he has hosted new students in the school’s graduate programs each fall at the Prairie-style icon, not far from his boyhood stomping grounds.

“I had the meet-and-greets there so students would realize the importance of these places firsthand,” he says. 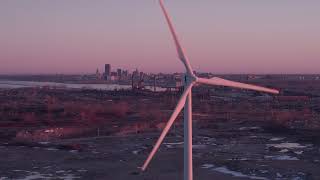 Skerker has supported the school in various ways, including the production of a documentary film in 2018, titled “See It Through Buffalo,” which illustrated the 50-year partnership between Buffalo and the architecture and planning school.

Skerker also co-chaired the 2011 National Trust for Historic Preservation Conference, a rare opportunity for the city and its architecture school to tell the region’s complex story of boom and bust on a national stage, he says.

He credits Dean Robert Shibley with contributing vital urban planning expertise to city government and for shaping the school into “an intellectual center for understanding urban design issues, like streetscapes and parking.”

To support Shibley’s vision, Skerker wants more top-quality students and faculty to choose UB. “When kids are out on the streets with sketchbooks, there’s this momentum and energy about what the future might look like,” he says.

To that end, Skerker has supported the school in various ways.

He sponsored two international exhibitions about the school and its symbiotic relationship with Buffalo as part of UB’s invitation to a contemporary architecture exhibition in Venice, Italy, held in conjunction with the prestigious Venice Architecture Biennale.

Created by UB architecture and planning students, faculty, and a local film company, the first exhibition was a documentary film in 2018, titled “See It Through Buffalo,” which illustrated the 50-year partnership between Buffalo and the architecture and planning school. The second exhibition–“Buffalo Constructing Buffalo: From Olmsted to Van Valkenburgh” (2021) detailed the school’s leadership of the civic planning process behind re-envisioning Buffalo’s LaSalle Park, which will soon be transformed into a world-class public park on Buffalo’s Lake Erie waterfront. Both exhibitions bring the school’s “city-as-classroom” engagement with Buffalo–and the transformative impacts that relationship has had on the communities and urban fabric of the city–to the global stage.

Skerker also named the School of Architecture and Planning as a beneficiary in his will. “I’d like to see the school grow and engage even more, so that Buffalo continues to have a school of architecture that can fully integrate into the fabric of civic life,” he says.

His investments establish a new source of funding for architecture and planning education at UB that will have a lasting influence on Buffalo’s architectural narrative.

Robert Skerker is former chairman and CEO of his family’s Buffalo-based housewares company, Robinson Home Products. After 20 years expanding the company’s manufacturing and distribution capacities, he sold it to employees in 2006 and continued in leadership roles for several prominent local and national cultural organizations, including the Erie County Cultural Resources Advisory Board, the Buffalo Philharmonic Orchestra, the Buffalo History Museum, and Frank Lloyd Wright’s Darwin Martin House. He is currently a trustee of the Frank Lloyd Wright Foundation in Scottsdale, Arizona, where he splits his time with Buffalo.