Share This Print
“I had made it, and then it just slipped away.”
Jake Schum 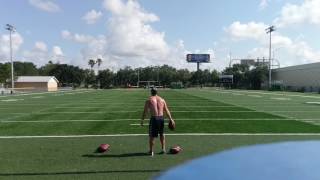 Jake Schum (BA ’12) was selling gym memberships at a Buffalo-area fitness club in spring 2013 when he got the call he’d been waiting nearly a year to receive. An NFL team was interested.

A year earlier, Schum was dispirited after being passed over in the NFL Draft. He had wrapped up an outstanding two-year stint as UB’s starting punter and had a strong showing at a combine, an event where prospective players train in front of NFL scouts in the hopes of getting drafted or signed. But the draft came and went, and Schum was left looking for work elsewhere. So he took a job at the Buffalo Athletic Club and, in his spare time, trained with respected kicking coach Sam Watts.

At a regional combine in 2013, Schum caught the attention of the Cleveland Browns, who signed him that March. It was a dream realized. But it didn’t last long. The NFL is a cutthroat business where players' jobs are almost always on the line, as Schum would soon learn.

Not even two months later, the Browns released him. “That was the hardest one,” says Schum, who went on to be cut several more times over the next few years before landing in Green Bay. “I had made it, and then it just slipped away immediately.”

But Schum persevered, as he had learned to do during his college career. After playing one season at SUNY Buffalo State, he planned to transfer to UB. The Bulls, however, had a punter, and the coaching staff turned Schum down several times. He returned to Buff State for his sophomore year but decided to train instead of play.

Schum made the Bulls roster as a walk-on that spring—as a receiver on the scout team. Unable to showcase his punting ability during practice, he would kick before and after UB’s workouts to get the coaches’ attention. It paid off: He was named the starting punter his junior and senior years (2010 and 2011) under then-head coach Jeff Quinn.

Fast forward to 2013, after the Browns released Schum. That September, the Buccaneers invited him to Tampa for a workout and signed him the following January (after the season had ended), only to release him in May.

And then things got really crazy. From June 2014 to the following August, Schum did stints with the Jets, the Bucs (second time), the Jets again, then the Bucs again. He was Tampa Bay’s starting punter in 2015. They released him in August 2016. Through it all, Schum leaned on his family; his pit-terrier mix, Emma; and coach Watts for support.

Two days after the Bucs cut him for the third time, Schum was in Green Bay with the Packers, where he started last season. “I just left and never saw my apartment again,” Schum says. “Moving around is tough. That’s the hard part people don’t really see.”

Rob Golabek (BA ’12), Schum’s friend and former classmate at Frontier High School in Hamburg, N.Y., and at UB, flew to Tampa, packed up whatever belongings he could fit into Schum’s SUV and drove Emma up to Green Bay.

Schum had one of the best games of his young career in the NFC divisional playoff last January, an instant classic in which the Packers beat Dallas on Mason Crosby’s game-winning field goal in the waning seconds. Schum booted a 66-yard punt earlier in the game and was the holder for Crosby’s pressure-packed kick. The win sent Green Bay to the NFC championship game, which they lost.

The Packers offered Schum a one-year extension after the 2016 season. Then, during offseason workouts in the spring, he hurt his back. The Packers released him in June. On his Instagram page, Schum posted a photo of himself with Emma and offered a heartfelt thanks to the Packers organization and fans.

“Those that know my story, it doesn’t end here,” he wrote. “Just another chapter.”

Days later, Green Bay re-signed him and placed him on injured reserve. Schum, who turns 29 in January, has since been working with a team of physical therapists in Buffalo to get healthy for next season.

There are no guarantees the Packers will keep him. But wherever Schum ends up, he’ll be ready for the next chapter in his nonstop NFL adventure.