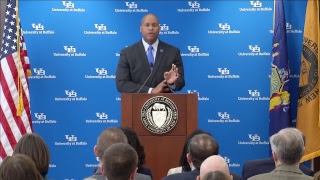 Mark Alnutt was named UB’s new director of athletics in March, succeeding Allen Greene, who left for the same post at Auburn.

A former Division I football player—he was a linebacker and tight end at Missouri—Alnutt joins UB from the University of Memphis, where he was deputy AD.

The Kansas City, Mo., native joined UB at the perfect time. Both Bulls basketball teams posted historic seasons that garnered national attention, and several other sports are faring increasingly well. “The positive trajectory of this athletics program is second to none,” Alnutt said in a written statement.