Share This Print
“I was amazed by the beauty of it, the scientific accomplishment, and that again Einstein's theory of relativity prevailed and exactly predicted what we have seen. ”
Doreen Wackeroth, professor
Department of Physics 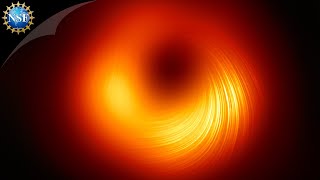 The world was in awe last week when astronomers unveiled the first-ever picture of a black hole. Captured by a global network of ground-based telescopes, the image showed a dark abyss at the center of a glowing ring of super-heated gas.

This first view of a black hole was, like early photographs of the Earth from space, an iconic and emotional visual. It was a reminder of the wonder of nature, and a milestone in humanity’s exploration of the heavens.

Black holes, predicted by physicist Karl Schwarzschild’s solution to Albert Einstein’s equations for gravity, are regions of space that are so dense that not even light can escape their gravity.

The one that scientists imaged lies some 55 million light-years from Earth at the center of a galaxy called Messier 87 (M87). More than 200 researchers from around the world worked together to capture the picture, a visual representation of radio data collected by the global telescope array, known as the Event Horizon Telescope.

UB physicists said they were astounded by the detail of the image, and that the ability to visualize a black hole heralds a new era of science in the field.

Dejan Stojkovic, professor of physics, who has researched black holes as a theoretical physicist:

“This is the first time we have a visual image of the region so close to the black hole event horizon (a point of no return). The event horizon is very sensitive to an underlying theoretical model.

“Right now the image is still consistent not only with what Einstein’s theory of general relativity predicts, but also with some exotic alternatives that differ from Einstein’s black holes only slightly. As this field progresses further, and images of higher and higher resolution become available, we will be able to distinguish between the different underlying theories.

“We knew for some time that the Event Horizon Telescope would show the first-ever picture of a black hole, but the image was better than I expected. … Nature was kind of generous to us, and the orientation of this black hole was such that we can clearly see a black disk at the center. It could have easily have happened that the picture was much less clear and symmetric.”

“I was amazed by the beauty of it, the scientific accomplishment, and that again Einstein's theory of relativity prevailed and exactly predicted what we have seen.

“Seeing a black hole, or rather, its shadow, for the first time, is a huge scientific accomplishment and success for fundamental science. It is only the start of a new era of black hole astronomy, which will provide many more insights into the nature of black holes and our understanding of gravity with future, more sensitive measurements.”

“I was totally in awe of the technical accomplishment, and a little humbled to actually see a major prediction of general relativity right before my eyes. The black hole can fit our entire solar system inside of it!

“Aside from being the first time a black hole has been imaged by humans (which is an accomplishment in and of itself), this also provides exciting new opportunities to numerically test these predictions of general relativity very precisely against actual data.”

CNN featured John Leddy in a story reporting on a study showing that the rate of kids sports and recreation-related emergency room visits for traumatic brain injuries declined 32% from 2012 to 2018, likely due to the decreasing number of kids playing tackle football.

The controversial legal doctrine at the heart of the Floyd, Brooks, Arbery cases

The Wall Street Journal featured Guyora Binder in a story on the felony-murder rule, a controversial legal doctrine at the heart of the George Floyd, Rayshard Brooks and Ahmaud Arbery cases.

Analysis: Retractions and controversies over COVID-19 research show the scientific process is working

Mark R. O’Brian writes in PBS NewsHour about how retractions and controversies over coronavirus research show that the process of science is working as it should.