Family drew Cassie Oursler back to Buffalo, but an inspiring coach sealed her transfer to UB

Cassie Oursler (31) was a towering presence for UB during the 2016-17 season. Photo: Paul Hokanson 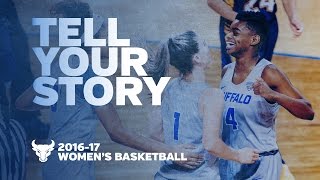 Check out a video recap of the Bulls season.

A week before Thanksgiving 2014. That’s when Cassie Oursler knew she needed to come home.

Then a sophomore at Robert Morris University, Oursler was in Illinois for a basketball game when she learned that her younger sister, Layla, who was 5 at the time, had suffered a seizure and been hospitalized back home in Grand Island, N.Y. Layla has since recovered and is doing fine. At the time, though, Oursler felt helpless and heavy-hearted. “She’s my best friend. After that game, I talked to my coach at RMU and said I’m transferring. I need to be closer to home,” Oursler recalls.

Soon after, she was on the phone with UB coach Felisha Legette-Jack. She was sold on UB before she hung up. “It was her energy. I was like, ‘That’s where I’m going. I want to play for her,’” says Oursler, a junior psychology major.

So over the break, she packed up and made the four-hour drive back home from the RMU campus in Pittsburgh. Due to NCAA transfer rules, she had to sit out a full year. Her first game in a Bulls uniform was in December 2015.

At 6 foot 3, she’s the tallest player on the roster. And she’s been central to UB’s success in what has been a historic season. The Bulls went on a 10-0 tear, the best start in program history.

As of press time, UB was poised to make a postseason run, with hopes of earning a second-straight appearance in the NCAA Tournament. If they make it, it will also be the second trip for Oursler, who helped RMU get to the tourney in March 2014. (The Bulls ended up falling to Toledo in the MAC Tournament semifinals and finished the season 22-10.)

Indeed, the Colonials were immensely successful in Oursler’s freshman season, but it wasn’t enough to keep her away from home. Family is everything to her. Her dad, Christopher, is a single parent of four kids: Miranda, 23; Oursler, 22; Josh, 15; and Layla. “It’s hard for him, which is also why I wanted to come home, so I could get a part-time job here and help out,” says Oursler, who will graduate in May and wants to open her own daycare center.

This was supposed to be her final season of basketball. But the NCAA granted her an additional year of eligibility, meaning she’ll be back next year.

As thrilled as Oursler is to play again next season, one of UB’s youngest fans is even more excited. That would be Layla, who has come to every Bulls home game this year and has hung out in the team’s locker room a few times.

“I like watching her play,” says Layla. “We don’t have to drive four hours to Robert Morris. Now we can drive 20 minutes.” In addition to being a fixture at UB basketball summer youth camps, Layla also plays volleyball and softball—the sports her big sister played.

You can guess where this is headed. “She’s going to play for UB,” says Oursler. “She and Coach Jack already have a plan.”