Joe Licata (BA ’15) made a statement by staying close to home. UB football fans know him as the guy in the helmet throwing touchdown passes. Most don’t know that this record-setting passer is just as comfortable sporting a fedora and singing along to Frank Sinatra.

Licata proudly hails from a “100-percent Italian” family, one that has a deep admiration for Ol’ Blue Eyes. Last summer, he organized a gathering at the family cottage in Crystal Beach, Ontario, to celebrate Sinatra and, simultaneously, the day a half-century earlier when his grandmother bought the place where they vacation each year. Licata posted a picture on Twitter of his parents, three sisters and him—all clad in fedoras—posing with a cardboard cutout of Frank. He included the hashtag #MyWay.

Licata graduated in May 2015 but had one year of eligibility remaining, allowing him to play this past fall. He left UB as the program’s all-time leader in career passing yards (9,485), touchdowns (76) and wins as a starter (he went 21-19). He led the Bulls to their third bowl bid in program history in 2013; they lost to San Diego State in the Famous Idaho Potato Bowl. He threw a school-record 29 TD passes his junior year.

“When people look back, I want them to see a team that fought hard and had a lot of pride in the name on their chest, and someone who had fun out there playing for the city, his family and friends,” Licata said.

Licata didn't get drafted by an NFL team this past April, but the Cincinnati Bengals signed him after a work out in May. Read some coverage of his journey to the pros below. 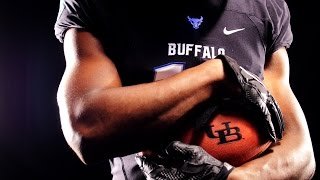 The new Nike-designed uniforms feature blue, black and white jerseys and white and black pants. All three jerseys will have Buffalo inscribed above the numbers across the chest.

From new students to seasoned alumni, family to faculty and staff members—everyone can show their pride during Homecoming and Family Weekend at UB! Click to see more information.