The NFL’s Branden Oliver returned to UB to earn his degree—and send kids a message.

Branden Oliver came back to Western New York in fall 2014, carrying the football for the San Diego Chargers in pursuit of a victory over the Buffalo Bills at Ralph Wilson Stadium. It was a proud moment for Oliver, as well as his family, friends and anyone associated with UB athletics.

Oliver—or “Bo,” as he is known on campus—returned again at the start of the spring semester, this time to UB, carrying his textbooks in pursuit of the final credits needed for his bachelor’s degree in sociology.

It was an equally proud moment when he walked across the graduation stage in May.

“That was always a goal of mine, to come back and finish when I was done playing football,” Oliver says by phone following a Chargers training camp practice. Speaking to youth groups in the San Diego area last year motivated Oliver to finish his schooling now. “I didn’t want to waste any more time,” the second-year running back says. “If you get the opportunity to do something great and honor God, you have to do it.” The NFL Continuing Education Program paid Oliver’s tuition. The opportunity to resume training with close friend John Opfer (BA ’99) at his Proformance facility near the North Campus only increased Oliver’s desire to come back.

“He felt like a hypocrite getting in front of kids and telling them to stay in school when he didn’t have a degree himself,” says Opfer, who worked with Oliver six days a week during the semester, then had him over for Sunday dinners. “He wanted to tell kids that he walked the walk.”

UB Known in the NFL

A number of NFL players also suited up as UB Bulls. Check out a list of NFL drafted and undrafted players below, and find a list of all our professional athletes in the Fan Zone.

*Indicates players who are currently active in the NFL. 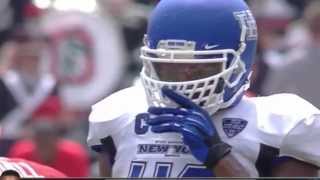 Watch some highlights from some of our most recent NFL player from their time as UB Bulls.